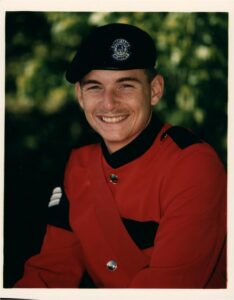 Paul Vrana 1983-85 Some 39 years ago I was a young teenager whose outlook was bleak. It was a story that was all too familiar:

That was me in a nutshell and despite the best efforts of my parents and teachers, nothing changed. I repeated my grade eight years in an attempt to catch up, but by grade ten I had a remarkable 53% average, was several credits behind and hung out with the smokers in the “butt” lounge at school.

In my grade ten year the Toronto Star published an article about the Academy which my father shared with me. After reading the article, “we”, mutually agreed to check things out and set up an interview. This may seem backward to you but when I use the word “we” it was actually me wanting to go as I was an Air Cadet and had enjoyed my time in Cadets, while both my parents had been to boarding school and did not have positive experiences. I can still hear my mom on the drive down talking about how far away it was and how alone I would be……. At the Academy, I stood before the headmaster, was asked a few questions, and was then escorted about the school by a student NCO, while my parents stayed behind to talk shop with the Headmaster. I am not quite sure what happened in that half-hour but by the time the tour was over I had absolutely no interest in going to the Academy and my parents well, they were busy writing a deposit check to hold open an admission spot in September. Oh, the Magic! On September 5th, 1983 I “entered the land of the living” (GSB) and began the journey that would radically change my life. I found myself succeeding in many areas of academy life. Each success was met with praise, sometimes reward and always a new challenge or responsibility. A great deal of mentoring also took place both cadet to cadet and staff to cadet which helped steer you in the right direction and increase your chances of success. You don’t see it at the time because you’re in the thick of it, but you are beginning to change into that “other person.” A person that takes pride in themselves, their work, and begins to treat others with respect.

I did not realize how profound the change was until I went home on leave that November. I went to visit my old friends and distinctly remember being upset by the way they treated me and talked down to me. They were not treating me any different than they had before, the difference was that I had changed and could now see ever so clearly how they perceived me, and I did not like it one bit. It was on that weekend I decided never to go back to that life. By the fall of my second year after a lot of guidance and hard work, I was promoted to the School’s Head Boy, by June I graduated with a 77% average and was proud to have started many new traditions at the Academy like the precision drill team. And you remember that lost boy who was incapable of succeeding academically…. College Diploma with High Honours, University Degree and later a Masters Degree in Education with High Honours, 2 great careers one in business and one in education.

It was a lot of hard work, nothing ever came easy, and there were many failures to learn from. During these times I found “Labour” to be one of my greatest allies. What I lacked in smarts and talent was made up through sheer effort, determination, and a lot of work. Even to this day when I am confronted with an “insurmountable” challenge, I remember that first fall exercise, rucksack digging into my shoulder blades, blisters on the heal, calves burning, with five hundred meters of “hydro hill” ahead, and that insurmountable challenge well, I got this.

Success is rarely an individual endeavour and the village that is Robert Land Academy has raised many fine children. To the incredibly special staff at the academy, thank you for getting me my life back and doing the same for so many others. To Col. Scott Bowman the founder of the Academy, thank you for seeing in me the potential and believing in me when others did not. To Academy Sargent Major Andy Anderson, thank you for your lessons in leadership and integrity, they have been invaluable to me throughout my life and served me well. Finally on a more personal note, to my departed parents, thank you for sacrificing so much to get me to the academy and to keep me there even after dad had lost his job.

So where am I now? I am married 32 years to my academy days sweetheart Dineen, recently retired, have three wonderful children, three grandchildren (and counting) and am looking forward to my daughter’s nuptials this summer.

Thank you to L Col. Smid for creating an alumni committee and giving the old boys the opportunity to connect and give back. So, whether you are our newest alumnus or oldest, left as a recruit or NCO, it does not matter. We have all drilled on the same square, ran laps around it, slept with an awful itchy grey blanket, have some really great stories to share and we all made our socks smile.

We are a family, and we welcome you.

So spread the word and get hooked up to the mailing list by contacting Chris at chris@chrismacleod.ca.