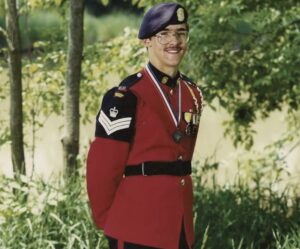 When I was growing up in Northern Virginia, I was often found down by the creek with a fishing pole in hand or tubing the day away with friends or on my own, simply exploring nature and its offerings or playing soccer which, I loved to do. That was after school of course. Chores and homework? That could wait. When I turned 12, I began to be grumpy with my parents more often than not and my schoolwork and grades began to drop consistently and tensions rose in our household and changes had to be made. That was 1980 or so.

In the summer of 1982, I moved to live with my father in Ottawa, Ontario. I had missed him and wanted to be closer to him and hopefully, a new environment would help me get back on track. Well, by March Break of 1983 I was dismissed from grade 9 and still somehow managed to achieve 1 credit in total. I rarely attended class or did any studying and I was pretty hard to keep track of despite having a personal tutor/ babysitter assigned to me for about 10 hours a day. At that time my father, a retired US Marine Major, looked into various options to try and get me to settle down, focus, and follow basic rules. It wasn’t that I was hurtful or intentionally\ problematic. I think I was simply lost and wanted to have fun with my friends, most of whom were not doing well at school either.

In June of 1983 I was dropped off in Wellandport, Ontario for summer camp at Camp Keewatan. The first couple of weeks I struggled against the change, the authority and activities that I would soon come to love again. It was probably the best summer of my life. Living in the woods next to a mosquito-infested swamp, 3-5 day hikes camping in nature, 2x week-long canoe trips in Algonquin Park portaging between lakes with a distance of 1km to 5km, bathing with the leeches in crystal clear lakes and waterfalls and helping other campers do things they didn’t know they could do! It was awesome! I think I still remember all of the songs we would sing. They were hilarious! After the camp session was over, I went home for a week or so and then it was back to Wellandport for military school at Robert Land Academy. My friends were astonished as I was considered the least deserving of such ‘harsh’ measures. Again, I struggled in the beginning until I had a catharsis and epiphany of sorts wherein the Academy Sargeant Major spent some quality time talking to me and hearing my woes and misgivings.

After that, I actually started trying and the results were noticeably better. And I felt consistently better than I had in years and I began learning new ways to be and to help myself and others. It was very refreshing. Today, I am the Assistant Manager of the Produce Department for a major grocery chain. It is physically demanding but very rewarding. I am often amazed at the end of a shift at how much product we move and how many steps I take in a day. It ranges from about 15,000 to 30.000 paces whether simply organizing and stocking fruits and veggies to pushing carts when I am asked to. It is certainly not what I had envisioned my future would be like but I am thankful for the opportunity and most of all that I am able to do it well. I am also very thankful that I have a loving family to come home to every night. They provide so much comfort and connection. Adult life is more of a challenge than I thought it would be in some ways. I was told. I was warned. In my experience, there is nothing like the first-hand experience to really provide a life lesson of value. I firmly believe that we learn and grow most when we are outside of our comfort zone and none of us do it on our own so if I can help, I will.

I don’t know if Robert Land Academy taught me a healthy work ethic or it simply fostered and reinforced what was already there. Either way, it worked for me and I am thankful I attended RLA for 4 years until graduating and going off to Memphis State University and later achieved a B.A. in General Studies from Brock University while working at RLA in various capacities. I certainly would not have graduated high school, enjoyed the unique experiences and made the long-lasting friendships had my father not made the tough decisions and sacrifices he did to try to set me straight.

Of course, the staff at the Academy played a critical part by being fair, firm, and friendly with me. Thank you! Now, in my early 50s, I have the opportunity to give back to the Academy as a member of the Alumni Association. We have a really good group of former students and current staff members who are developing events and activities including the Fall Exercise this coming October. It should be awesome to march alongside current and former students and staff as well! On behalf of the Academy, the Alumni Association and Colonel Smid and his staff, I invite all interested Alumni to forward a similar recounting of your insights and experiences at the Academy if you would like to join this year’s Fall Exercise and connect with the students and staff as they continue this important and challenging totem in the student’s development.